Apologies for the lateness of this post, but then again I’m not convinced the Duchess of Cambridge shouldn’t apologize for wearing the world’s most boring coat dress. I’m only half-kidding, but we’ll get there.

Let’s start at the beginning: Kate kicked off her visit to Luxembourg, a solo trip she undertook on behalf of the Queen, by stopping by the Grand Duke Jean Museum of Modern Art (MUDAM), where she toured exhibits by Sir Tony Cragg and Darren Almond.

According to the Daily Mail:

The Duchess had the Luxembourg princess and prime minister in stitches when she showed off her mischievous side and joked about testing Sir Tony’s theory about the representation of order and chaos, by pulling down a carefully erected tower of glassware.

Later on, she visited the Place Clairefontaine to tour a cycling-themed festival.

Next up was the Dräi Eechelen Museum to tour the 1867 Commemoration Exhibition. According to the Royal Family’s rundown, “The new exhibition reveals how the dismantling of Luxembourg’s fortifications laid the foundation for the transformation of Luxembourg into an open and outward- looking city and country.”

Kate took part in the official commemoration of the 1867 Treaty of London that confirmed Luxembourg’s independence. The UK’s deputy ambassador to Luxembourg issued the following statement:

“We have a good strong bilateral relationship and always have with the Luxembourgers, they still very much recognise the role we had in liberating them during the war and we have a very strong relationship between the two financial centres particularly, and that’s something we are very anxious to continue and maintain.

“There are also close ties between the two royal families, with three generations of the Luxembourg royal family having been educated at our military academy at Sandhurst.”

Now for some color: Kate was accompanied to various engagements throughout the day by Crown Princess Stephanie of Luxembourg, the 33-year-old wife of Guillaume, Hereditary Grand Duke of Luxembourg, who also joined his wife and Kate in the afternoon.

They’ve been married since October 2012. Guillaume is the heir of his father, Henri, Grand Duke of Luxembourg, who has ruled the duchy since 2000, and Maria Theresa, Grand Duchess. The ducal family is Roman Catholic and their house is that of Nassau-Weilburg, which has been around, in some from, since the 14th century.

Stephanie is Kate’s closest counterpart within the family based on age and the fact that they married into their current positions. However, there are some notable differences. For one, Guillaume and Stephanie haven’t yet had to deal with raising a family in the spotlight. Secondly, based on position, Stephanie is actually more closely a peer to the Duchess of Cornwall as the wife to the heir apparent.

Finally, Stephanie’s family can in no way be referred to as “middle class,” as the media are so fond of reminding us about the Middletons. Born in Belgium, she is the daughter of Count Philippe de Lannoy and is remarkably well-educated for a member of a royal family. She earned a master’s degree in Berlin and speaks five languages.

As for the fashion, I thought it was rather dull. I’m not a huge fan of coat dresses to begin with, though I’ll grant that they seem practical for a lot of what Kate has to do and the weather. But she has plenty of other coats in this color, not to mention this exact coat by the same designer in green, so it’s difficult to get particularly excited by it. It was all a bit…lackluster – or what you would pull together for work if you weren’t really feeling it that morning, but were still the Duchess of Cambridge.

Those following Kate’s fashion more closely than I were excited by the debut of new blue topaz earrings by Kiki McDonough, which is seemingly Kate’s favorite jewelry label given how often she wears those pieces. They added a nice touch of bling to an otherwise very safe ensemble. 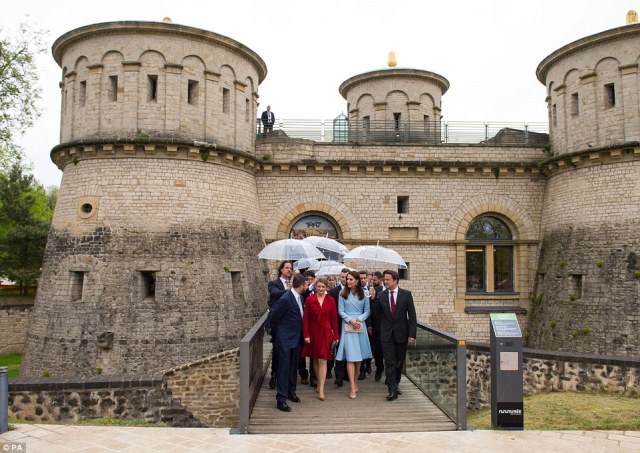 We’ll next see Kate at the Buckingham Palace Garden Party with the Duke of Cambridge and Prince Harry, but beyond that nothing else has been added to her calendar. I have a feeling it’s going to stay that way, too, since her sister’s wedding is next Saturday and it’s probably all hands on deck until the event is behind them. Things will likely heat up again in later in May and early June.