About a year ago we covered the early Howards, including John, 1st Duke of Norfolk who saw his rise through the Yorkist kings, and his son, Thomas, Earl of Surrey, who managed to work his way into the favor of Henry VII. The family’s ascent was solidified by the 1495 marriage of Thomas’s eldest son and heir to Queen Elizabeth’s younger sister, Anne. Unfortunately the only product of the marriage was a short-lived son who passed away around the age of 10. Anne herself died of unknown causes in 1511 and her widower found himself in need of another wife.

END_OF_DOCUMENT_TOKEN_TO_BE_REPLACED

The life of Margaret Pole, Countess of Salisbury is likely familiar to those who enjoy studying the Tudors, but for those who haven’t heard of her, it is a story that perfectly exemplifies several realities of life outside the very center of the Royal Family. Margaret was born a niece of a king and ended up the daughter of a traitor, the wife of an unknown entity and the mother of a papist in the middle of the reformation. She managed to survive until the third act of Henry VIII’s reign, but by then she stood for something else entirely as one of the last Plantagenets to have made it that far in Tudor England.

END_OF_DOCUMENT_TOKEN_TO_BE_REPLACED 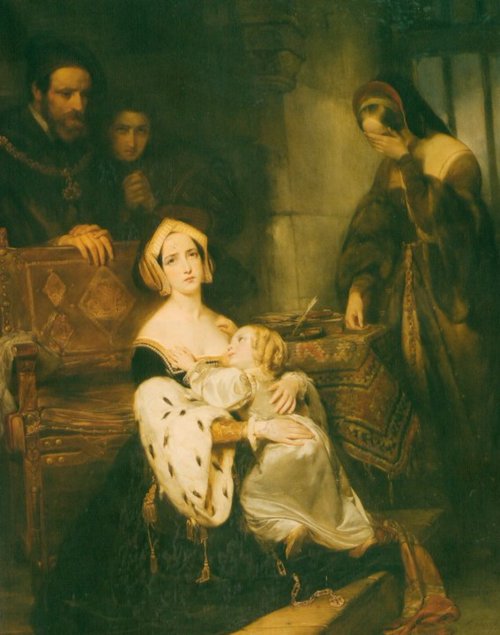 On April 12, 1533, Anne Boleyn appeared before Henry VIII’s court for the first time as queen. She was four months pregnant after a calculated gamble she and Henry took the previous autumn to secretly marry and consummate their relationship. For Henry this meant a frantic winter and early spring finalizing his divorce from Katherine of Aragon and solidifying the legality of his second marriage. For Anne, the quick conception was nothing short of a complete victory. Henry moved heaven and earth to make Anne his wife – her half of the deal was to deliver the son and heir he so desperately wanted.

END_OF_DOCUMENT_TOKEN_TO_BE_REPLACED

Last week we addressed the question of when Henry VIII’s infatuation with Anne Boleyn began, but today we jump forward seven years to the final stages of Anne’s preparation for marriage – in other words, how exactly Henry made her queen. The evolution of their relationship – from Henry wanting her as a mistress, then a wife – held within it the destruction of the Tudor family. By 1532, Katherine of Aragon had been physically removed from court, out of sight, if not out of mind. Princess Mary, loyal to her mother and her birthright over her father’s “happiness,” found herself firmly out of favor for refusing to accept Anne.

END_OF_DOCUMENT_TOKEN_TO_BE_REPLACED

There was one thing that Henry VIII and his siblings had in common: marrying whoever they wanted. Certainly we know how Henry went about this, but less known is the extent to which his sisters did. After James IV of Scotland died in 1513, Margaret went on to marry twice by her own choice. Today, however, we’re going to take a look at their younger sister, Princess Mary, who did her duty by the king of France and then went the Tudor way.

END_OF_DOCUMENT_TOKEN_TO_BE_REPLACED

Back in May we covered Anne Boleyn’s trial and execution, so it seems only right we cover happier times in her life, or at least the rise that made her so famous. Today we’re going to address the question of when she first caught Henry VIII’s eye and what exactly those early months and years looked like. With the benefit of hindsight we so quickly jump from Anne arriving at Henry’s court to the political battles of the divorce, but there was a lull in-between that helped dictate where the ugly mess ended up. The “when” is important, too, because it speaks to what everyone’s motivation was – Anne’s, Henry’s and the councilors at the center of court.

END_OF_DOCUMENT_TOKEN_TO_BE_REPLACED

By the “union of Tudor and Stuart” I don’t mean that of England and Scotland, but rather the marriage that facilitated the eventual consolidation of power in James I in 1603 and the later formation of the concept of “Britain.” All of that was a long time in the making and it stemmed from the union of King James IV of Scotland and England’s Princess Margaret Tudor in 1503.

The alliance came together in the Treaty of Perpetual Peace signed on January 24, 1502 at Richmond Palace. The treaty was the first between the two countries in roughly 170 years and it ended what had become nearly two centuries of warfare – that said, it was England and Scotland, so even that two centuries needs to be put in the context of several more of bloody battles over sovereignty.

END_OF_DOCUMENT_TOKEN_TO_BE_REPLACED

In February I wrote a post laying out the case for why some believe Henry VIII’s fifth wife, Katherine Howard, might not have been guilty of every charge leveled at her in 1542. It included detail on her upbringing, her inclusion in Anne of Cleves’s household and her relationships with the men with whom she was believed to have had relationships with, save one. Notably lacking in the post was any real information on the actual royal marriage that brought Katherine infamy.

Perhaps that’s because I find it a bit repugnant – it’s hard to lend much earnest analysis to a marriage between an old man (by Tudor standards, at least) and a teenage girl. And while not uncommon back in the day, there’s a bit of difference between a foreign alliance and one in which a man like Henry VIII took a girl younger than his eldest daughter, with no education or life experience, and put a crown on her head.

END_OF_DOCUMENT_TOKEN_TO_BE_REPLACED

Anne Boleyn and Katherine Howard may have lost their heads to Henry VIII, but a part of me has always had the most sympathy for his daughter, Mary I. After all, she truly didn’t have a say in her association with the Tudors and it’s a particular kind of heartbreaking that her adversary was her father.

The question comes up now and again as to when England would have broken from Catholicism had Henry VIII not forced the issue in the 1530s and the answer usually landed on is that while it might have been delayed, the Reformation would still have swept the country in the 16th century. But it’s a tricky scenario to tackle, because it’s impossible to separate out the English brand of religious reform from Henry’s marital history, if for no other reason than it dictated both the succession and those with political power. Without Anne Boleyn it’s hard to accept Thomas Cromwell and Thomas Cranmer would have held the same sway, and without Anne there is no Elizabeth I and possibly no Edward VI.

END_OF_DOCUMENT_TOKEN_TO_BE_REPLACED

So much of Mary, Queen of Scots’ later life was operatic that it’s easy to gloss over her formative years. Her violent death, her rivalry with Elizabeth I, her disastrous second and third marriages, the possibility she was involved in a murder – all of this tends to drown out the rest. But much like Eleanor of Aquitaine, the “less” dramatic early years actually involved being the queen of France and Mary’s long-term residency at the French court uniquely positioned her as both a Stuart and Scottish monarch.