In honor of the Duke and Duchess of Cambridge’s seven-year anniversary today we’re going to take a look at the public highlights of the pair’s royal career. An interesting aspect of royal marriages, particularly in cases such as the Cambridges where they’re also the future king and queen, is that you are not just a married couple, but co-workers. Royal couples undertake numerous engagements as a pair, which, combined with the realities of living under one roof, means you’re spending significant quantities of time together. So far, that seems to be working out just fine for William and Kate, but here’s a look back at some professional and personal highlights from the last seven years:

I mean, duh. This is what kicked it all off, and I think this wedding has stood the test of (recent) history. It was beautiful, festive and seemed like a celebration of a genuine love story.

This is almost a placeholder for the number of times William and Kate have been in competition with one another during engagements, and not in Charles/Diana sort of way. Still, of all the races, games, etc. that these two have taken part in over the years, this one is probably my favorite. The activity seems to make them both come alive and in more than a few instances, you feel like you’re getting a glimpse into their real personalities. 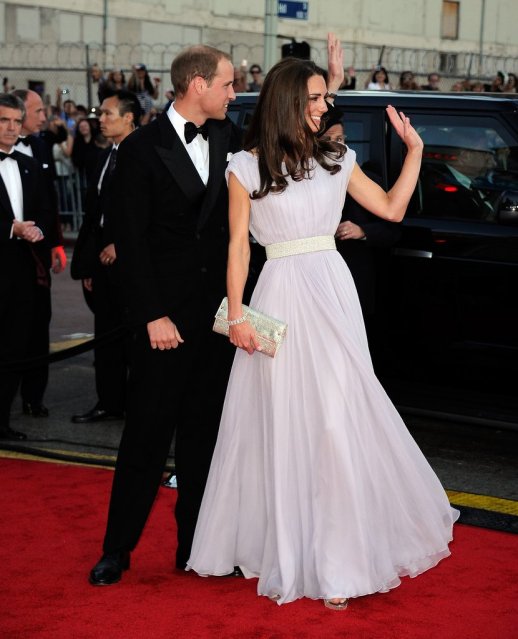 I almost cut this from my list, but ended up keeping it because 1) if you’ve been aware of this couple from the beginning then you remember this event and 2) it was the first formal event the two attended after their wedding. The next time we saw these two on another BAFTA red carpet wouldn’t be for another six years. I also distinctly remember seeing Kate up against pretty much every A-list actress and thinking she blew them away. That and I also recall reading an anecdote of the two of them being introduced as the Duke and Duchess of Cambridge at the event and exchanging grins across the table. What can I say? Everything was so new and shiny.

One year later and the summer of 2012 was all things Olympics when the games were held in London (thanks not a little to all the hoopla around the royal wedding and the Diamond Jubilee). William and Kate, along with Harry and many other members of the Royal Family, were frequently in the stands cheering on Team GB, but there was one moment of sheer joy and excitement when GB got the gold and William and Kate spontaneously embraced that perfectly captures the excitement of London that summer.

I know, Kate was seriously ill and this was the two of them literally leaving hospital, BUT, still, everyone was abuzz with news that the two were expecting their first baby. Given that people had been waiting for this since, well, about May 2011, it couldn’t have come soon enough. This was also the world’s first introduction en-masse to HG, so…there’s that.

We just recently did all of this for the third time, but neither that nor the birth of Princess Charlotte quite matched the expectation around George’s birth in 2013. He was a future king and the entree into a new generation of Windsors. As for William and Kate, they looked dazed and over the moon. After these photos were taken they drove back to their home at Nottingham Cottage, now occupied by Harry and Meghan, before retreating to Kate’s parents house for the first couple weeks. If that all sounds horribly normal, then you’re right. 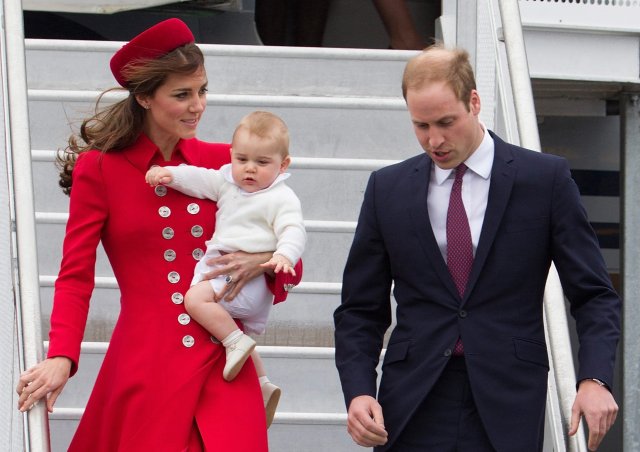 It was an incredibly windy day and Kate kind of looked like of like an airline hostess, but this was the world’s first real look at George and William and Kate as parents. It was also a day that birthed a thousand memes of George as a tyrant, one who is perpetually unimpressed by his surroundings. (I still have a minor obsession with Baby George’s facial expressions). 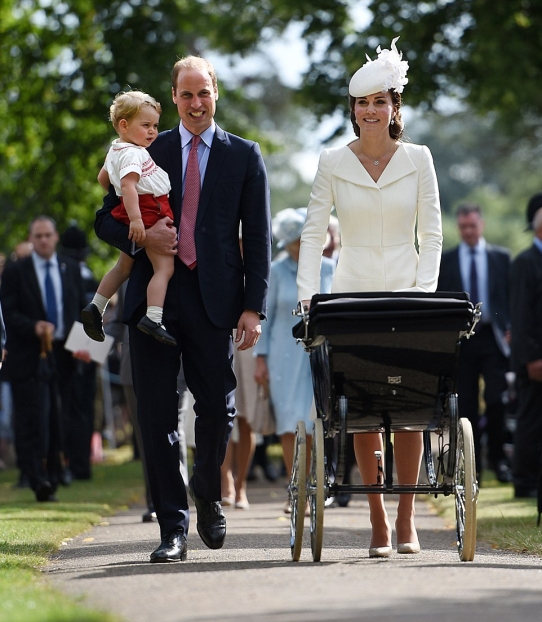 And then they were four. For every person who loves these shots of William and Kate walking towards the church on the Sandringham grounds there’s another who wonders if they know in which decade they live. But still, this day kind of had everything – the entire RF gathered, a temper tantrum from George and Princess Charlotte’s first appearance since being shown off outside the hospital two months before. One of Charlotte’s middle names is Diana and, not for nothing, she was christened in the same church as her grandmother was back in 1961.

Some moments just happen organically and this was one of them – well not the moment itself, which was orchestrated to the nth degree, but the fact that these images have staying power. This was but one engagement in the midst of a week-long tour, the emphasis of which took place in India. But William and Kate’s three-hour hike to the Tiger’s Nest monastery in the midst of all the activity was both peaceful and on-brand. Kate looked flawless (hair and makeup touched her up before photos) and reporters were pissed they couldn’t follow the two to the end. In a word, very Cambridge. 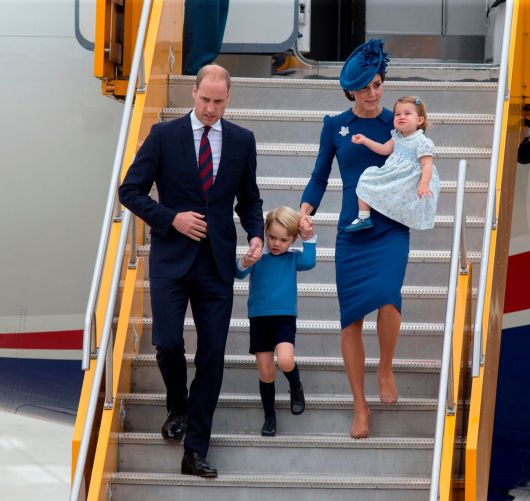 Basically an updated version of the New Zealand tableau two years before, this was the world’s first real introduction to Charlotte. Much like at her christening, everyone was pretty bowled over by how picture perfect the family looked, but mainly the big takeaways are that Kate continues to be able to balance babies in heels and George has no interest in shaking hands heads of government.

Again, sometimes these things just happen, but the images of William, Harry and a very pregnant Kate waving Harry Potter wands one day quickly went viral. They’re hilarious, but I also wanted to capture a major tenet of William and Kate’s newlywed years, which was the number of times they made up a trio with Harry. Despite being a fan of Meghan, I’m going to miss these three. 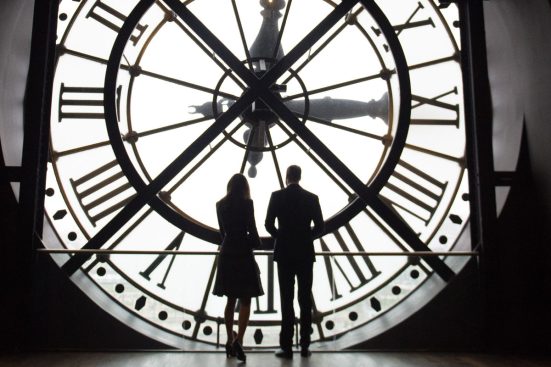 As you may have noticed, nothing from 2017 or 2018 made the final cut, but I think that has more to do with those moments not having had enough time to resonate. If there’s one that I think is in the running it’s this shot of William and Kate at Musée d’Orsay during their mini-tour of Paris last year. Visually, it’s just stunning. 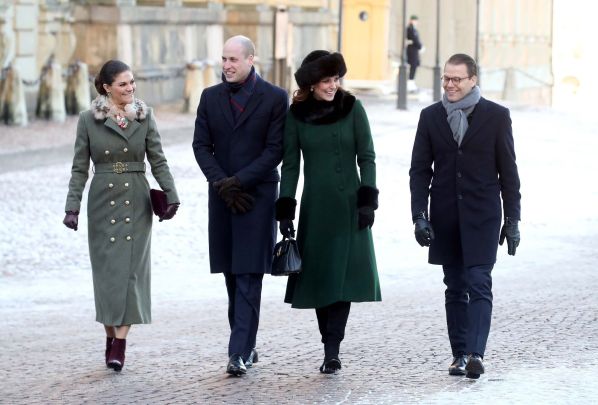 And last but not least, if there’s one memory we’ll take away from this most recent tour it’s Kate’s divisive floral Erdem gowns. But if there are two things, then the second would be the warmth between the Cambridges and Crown Princess Victoria and her husband, Prince Daniel. The shots of them walking through Stockholm were gorgeous and the fact that Kate was pregnant with her third child and in the middle of a winter in which she worked more intensely than we’ve seen before made it all the more an interesting snapshot.